A retrospective survey of an implant, designed to resist bone loss

A retrospective survey of an implant, designed to resist bone loss

A significant percent of dental implants tends to lose bone support during the years. Gravity implants were designed to improve the mechanical bone adaptation in an attempt to overcome the problem. The present manuscript is a retrospective observation of 1 year of 25 single-loaded Gravity implants.

This was a retrospective study of files of patients who completed their treatment and were loaded for 1 year. The measurement of changes in the bone level was done according to the X-ray documentations that were found in the files of patients treated in the clinic of Kibutz Bror Chail. The schedule of dental implants’ follow-up in this clinic includes parallel periapical X-ray films at the stage of implant installation, the stage of loading, and at the end of a year of loading. A Student’s t-test was used to compare the bone level at the stage of loading and after 1 year of loading.

Twenty-five cases of one single-loaded implant per patient were included in the study. It was shown that most of the bone loss that was documented at the end of the healing phase was reconstructed (72%) during 1 year of loading.

According to this retrospective study, it can be concluded that implant design that enables bone loading by compressive stress may result in the reconstruction of the initial loss.

The mean bone loss around the dental implants at the end of the 1st year is reported to be around 1.5 mm.[1] Most of this bone degradation occurs during the healing stage that lasts nearly 3 months, with a mean loss of 0.79 mm.[2] In the next years, the rate of bone loss was reported to be 0.2 mm/year.[1] Lately, it was found that between 40% and 60% of the cases lost bone in a much more faster rate. It was also noted that this rate is even increased during the years.[3],[4] This process may include pains, discomfort, need for supporting treatment, extraction of implants, and financial costs. A major cause for this obstacle might be the limited capability of standard implants to transfer occlusal load stresses to the bone in a way that activates physiologic remodeling. Bone is mostly resistant to compressive load and best remodeled by this kind of stress. This stress is supposed to be intermittent in intention to prevent the bone fatigue during the process.[5]

Natural root is set to transmit kinetic energy flux into the bone by vectors that are perpendicular to the root surfaces in intention to curve bone space and elevate its energy density.[6] Mechanical bone reaction adapts repeated and identical gradients of brief bone distortions that are caused by this flux.[5] The main mechanosensors that learn these space distortions and react accordingly are the osteocytes.[7] The osteocytes translate these signals to mechanical bone adaptation by the activation of osteoblastic and osteoclastic turnover.

Bone remodeling is minimal during the physiologic spectrum of strains.[8] Remodeling is increased during disuse and during overload phases. Remodeling during load will result in a more resilient bone. A resilient bone absorbs more kinetic energy and turns it to strain (potential) energy without skeletal fatigue.[8] A strict overloading process will also increase the periosteal bone formation[9] as part of the modeling process in intention to protect the bone against fatigue. Thus, modeling of the bone may serve the goal of gaining initial bone loss during the loading phase, while remodeling might serve the preservation of the bone level.

Macrogeometry of contemporary implants might be less efficient in bone bending and mechanical signaling because of the greater possibility for a relative movement of the implants within the bone. This relative movement may result in kinetic energy dissipation because of mechanical friction, heat, and irreversible changes in the bone structure.[10] Mechanical friction by itself may result in friction corrosion of titanium and type 4 inflammatory reaction with bone loss.[10]

Gravity implants were designed to mimic partially, space distortions of bone caused by natural roots. While natural roots do it by normal stress vectors that are perpendicular to the root surfaces,[6] Gravity implants curve bone space by normal vectors that compress bone in one direction – the apical direction [Figure 1]. More than that, these implants are engineered to enable bone modeling and periosteal bone reaction by increasing bone strains beyond the physiologic range as a result of the increased stress level. 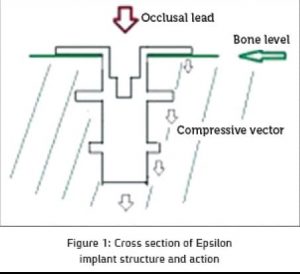 The present study is a retrospective observation of 25 files of patients that were treated by single-loaded Gravity implants in an attempt to study the adaptive bone reaction to loading by these implants.

The aim of this study was to follow the bone loss during the 1st year of loading in patients treated by Epsilon implant of Gravity Co. This study is a retrospective survey of twenty-five files of the identified patients that finished treatment (one implant per patient).

were healthy patients who were treated by a single-loaded implant. Their files included documentations of the three stages: the implantation stage, the loading stage, and postoperation of 1 year of loading.

The standard roentgen exposure conditions used in Bror Chail Dental Clinic are 70 kV, 15 Ma, and 0.35 s of exposure. Films are mounted in Haw Medica holders during examination in the parallel technique.

Monitoring of X-ray films was done by one researcher. Radiographs were checked over the same lighted viewer using optic enlargement of five times of the original film. The measurements were done with an electronic caliper, and the actual bone level was calculated relatively to the actual length of the implants. The bone level was measured from the most coronal margin of the implant. Measurements were done in one point for each implant that had the more pronounced initial bone loss. Every measurement was taken three times and the mean was calculated. A paired t-test statistical examination was used to check the results comparing the bone level at the three stages. 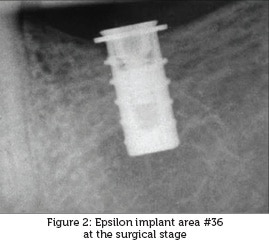 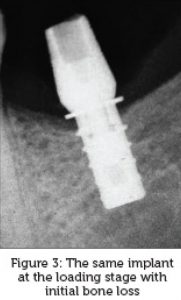 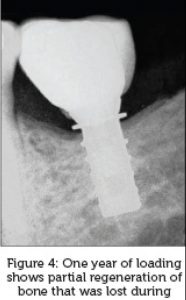 Dental implants were shown to lose bone support during the years. The life cycle of an implant may include three phases: initial phase of a fast bone loss at the postsurgical stage, the second phase of slow rate of bone loss during the years, and the third phase of accelerated bone loss at the end of its life cycle.[3],[4] Gravity implants were engineered to overcome the phenomenon of bone destruction by improving the mechanical bone adaptation. The unique geometry of Gravity implants maximizes kinetic energy flux (applied by impact loads) into the surrounding bone while elevating its strain energy density. This process enables a more efficient initiation of the process of mechanical bone adaptation in a way that imitates partially, natural root signaling for remodeling and even for the encouragement of modeling.

The present study is a retrospective observation that examines X-ray files of 1 year of loading of Gravity-Epsilon implants. The measurements revealed initial bone loss similar to that anticipated at the end of the healing stage of other implants.

The research of bone loss around the dental implants is usually calculated as the mean of the mesial and distal bone level nearby implants.[1],[2] It seems that this trend might reveal the impression of better prognostic and optimist pictures for the implants. In the current study, the measurements were subjected to the area (mesial or distal) with the most pronounced bone loss as the more risky site that is relevant for the implant prognosis.

Following 1 year of loading, instead of a continuing process of bone destruction, most of the initial lost bone was reconstructed as a result of remodeling and modeling processes. Obviously, implants that did not lose bone at the initial phase preserved their initial bone level.

According to this retrospective study, the loading phase in the 1st year of Gravity implants revealed a gain of 72% of the bone that was lost during the postsurgical phase. This result supports the thesis that activation of bone remodeling and modeling by dental implants has a major role in the preservation of implants’ support.

Ben-Yehouda A. Occlusal load transmission to bone via the periodontal attachment apparatus. J Dent Implants 2012;2:88-92.  Back to cited text no. 6 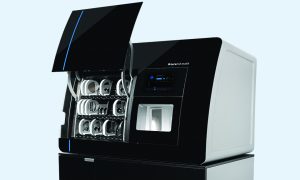 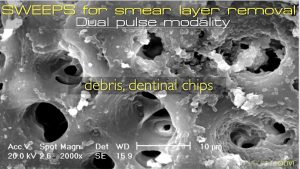 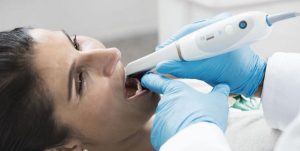 Epilepsy Safe Mode
Dampens color and removes blinks
This mode enables people with epilepsy to use the website safely by eliminating the risk of seizures that result from flashing or blinking animations and risky color combinations.
Visually Impaired Mode
Improves website's visuals
This mode adjusts the website for the convenience of users with visual impairments such as Degrading Eyesight, Tunnel Vision, Cataract, Glaucoma, and others.
Cognitive Disability Mode
Helps to focus on specific content
This mode provides different assistive options to help users with cognitive impairments such as Dyslexia, Autism, CVA, and others, to focus on the essential elements of the website more easily.
ADHD Friendly Mode
Reduces distractions and improve focus
This mode helps users with ADHD and Neurodevelopmental disorders to read, browse, and focus on the main website elements more easily while significantly reducing distractions.
Blindness Mode
Allows using the site with your screen-reader
This mode configures the website to be compatible with screen-readers such as JAWS, NVDA, VoiceOver, and TalkBack. A screen-reader is software for blind users that is installed on a computer and smartphone, and websites must be compatible with it.

We firmly believe that the internet should be available and accessible to anyone, and are committed to providing a website that is accessible to the widest possible audience, regardless of circumstance and ability.

To fulfill this, we aim to adhere as strictly as possible to the World Wide Web Consortium’s (W3C) Web Content Accessibility Guidelines 2.1 (WCAG 2.1) at the AA level. These guidelines explain how to make web content accessible to people with a wide array of disabilities. Complying with those guidelines helps us ensure that the website is accessible to all people: blind people, people with motor impairments, visual impairment, cognitive disabilities, and more.

This website utilizes various technologies that are meant to make it as accessible as possible at all times. We utilize an accessibility interface that allows persons with specific disabilities to adjust the website’s UI (user interface) and design it to their personal needs.

Additionally, the website utilizes an AI-based application that runs in the background and optimizes its accessibility level constantly. This application remediates the website’s HTML, adapts Its functionality and behavior for screen-readers used by the blind users, and for keyboard functions used by individuals with motor impairments.

If you’ve found a malfunction or have ideas for improvement, we’ll be happy to hear from you. You can reach out to the website’s operators by using the following email

Our website implements the ARIA attributes (Accessible Rich Internet Applications) technique, alongside various different behavioral changes, to ensure blind users visiting with screen-readers are able to read, comprehend, and enjoy the website’s functions. As soon as a user with a screen-reader enters your site, they immediately receive a prompt to enter the Screen-Reader Profile so they can browse and operate your site effectively. Here’s how our website covers some of the most important screen-reader requirements, alongside console screenshots of code examples:

We aim to support the widest array of browsers and assistive technologies as possible, so our users can choose the best fitting tools for them, with as few limitations as possible. Therefore, we have worked very hard to be able to support all major systems that comprise over 95% of the user market share including Google Chrome, Mozilla Firefox, Apple Safari, Opera and Microsoft Edge, JAWS and NVDA (screen readers), both for Windows and for MAC users.

Despite our very best efforts to allow anybody to adjust the website to their needs, there may still be pages or sections that are not fully accessible, are in the process of becoming accessible, or are lacking an adequate technological solution to make them accessible. Still, we are continually improving our accessibility, adding, updating and improving its options and features, and developing and adopting new technologies. All this is meant to reach the optimal level of accessibility, following technological advancements. For any assistance, please reach out to